«Primordia» is the suggestive name of the next point and click adventure to be published by Wadjet Eye Games («The Blackwell Deception«, «Gemini Rue«…). Developed by Wormwood Studios and ready to be released next december 5th, we have been lucky to get a preview version of the game (thanks Dave! ) so we have written a very special «Finding Inspiration» article.

Please bear in mind that this is the review of a preview version of «Primordia«; but we are pretty sure that the things we liked (and they are quite a lot) will be in the final version… 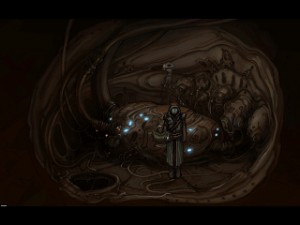 1. The art: it’s great how the whole universe of «Primordia» makes perfect sense, and the visual pieces fit in a very balanced way. Featuring a retro «low-def» pixel-art style, the backgrounds posses a clear influence of sci-fi classics: the organic design of the shipsreminds «Alien», the distopian-desert ambient reminds «Dune» and even «Beneath a Steel Sky«… The characters, though less detailed, are greatly depicted as well, and own a strong visual personality.

2. The characters: both Horatio and Crispin, the main characters of the preview version, are really, really interesting. Far from stereotypes, they depict a complex personality, and the interaction between them is frankly intense. As a matter of fact, Crispin is amazingly funny, and hearing its comments on anything, or even the «off-the-top-of-its-head» thoughts is really amusing… 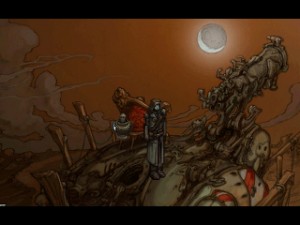 3. The story: the main inception of the story (a robot-only world, in which «mankind» has a kind of magical/religious shade) is really stunning and a gorgeous situation to start such a fascinating trip like this.

4. The voices: once more in a Wadjet Eye Games product, the acting is great and the quality is awesome (in fact, the voice of Horatio may sound familiar to you… :D)

5. The map: yes, maybe it’s a tiny detail, but is sooo great not to have to wander through screens and more screens to move from one spot to another!

In a nutshell, «Primordia» looks really, really, promising. If you have played a Wadjet Eye Games adventure before, you already know you can expect a top-quality product. If you haven’t, you should give «Primordia» it a try, because you won’t regret it.

And if you love graphic adventures with a retro twist, then there’s no doubt this is for you.

So you should all better stay tuned…