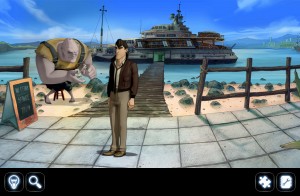 1. The storytelling: the way the story is told is awesome. The player goes on getting more and more information about the characters and the plot, slowly but surely, in a seemingly incidental way. However, the purpose of all that information is not incidental at all: every joke, every fun quote, every little detail the player gets about Liz and Dan… is going to be of importance later on. And once the player finishes the game, every little bit of information fits like a glove in the big picture. 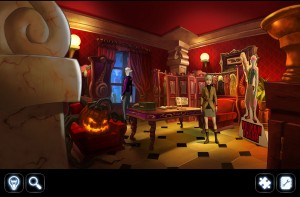 3. Liz Allaire: if you have played the game, you will have fallen at her feet… as we have.

We have already stated in this blog that the linear scope of Pendulo Studios games is not our favorite approach for a point and click adventure. But when you play such a fun, technically brilliant, ingenious game as «Hollywood Monsters» for iOS… well, it’s easy to look the other way.

As usual in Pendulo games, art, soundtrack, voice acting, music… are top notch, as any other review may confirm. Played on a first generation iPad mini, the game runs flawlessly -except for some minor issues in one specific chapter- and the original interface has been cleverly redesigned for touchscreens. In a nutshell, they made a good work porting the game from PC to iOS.

To summarize, if you want a game to «make your day» go for «Hollywood Monsters«. And if you want to enjoy it even more… go and examine everything over and over; talk to everyone; read every line of dialogue. Trust us: you won’t regret it.