Monkeys all around the world… and awarded! – 6

Fancy knowing how our monkeys did during their latest trips? Then do not miss this article about Fictiorama visiting IGF, Gamelab and the Indie Burger Developer Awards!

Back in January, as you could see in our Twitter account, we were shocked when we noticed Do Not Feed the Monkeys was a finalist in three categories at the IGF Awards.

This is us realizing #DoNotFeedtheMonkeys is an IGF finalist for Excellence in Design, Nuovo Award… and the Seumas McNally Grand Prize!!! AMAZING!!! Thanks so much!!! https://t.co/CfnLCqJLV9 pic.twitter.com/6veKGO2eFL

If getting any mention in any category at IGF, one of the most important indie games festival in the world, is an absolute honor, being a finalist for the Seumas McNally Grand Prize, Excellence in Game Design and Nuovo Awards, plus getting an Honorable Mention in the Excellence in Narrative category, was far beyond our wildest dreams. But, hey, it was true! Do Not Feed the Monkeys was a finalist for the same awards that Fez (Polytron Corporation), Papers, Please (Lucas Pope) or Her Story (Sam Barlow), just to name a few, won in the past!

We knew our chances to win any award, considering the amazing quality of the nominees, were tiny, but of course we didn’t want to miss the festival. So, for the first time in Fictiorama’s (short) history, we the three brothers that founded the studio decided to attend an international event. Denis Asensio, one of the game designers of Do Not Feed the Monkeys, also joined the crew and flew from Poland, where he’s working now.

The IGF exhibition took place from March 20th to the 22nd, and, as usual, it was included in the huge Game Developers Conference (GDC) event, which started a couple of days before. So we arrived to San Francisco on the 17th, eager to enjoy GDC, IGF and whatever came our way! 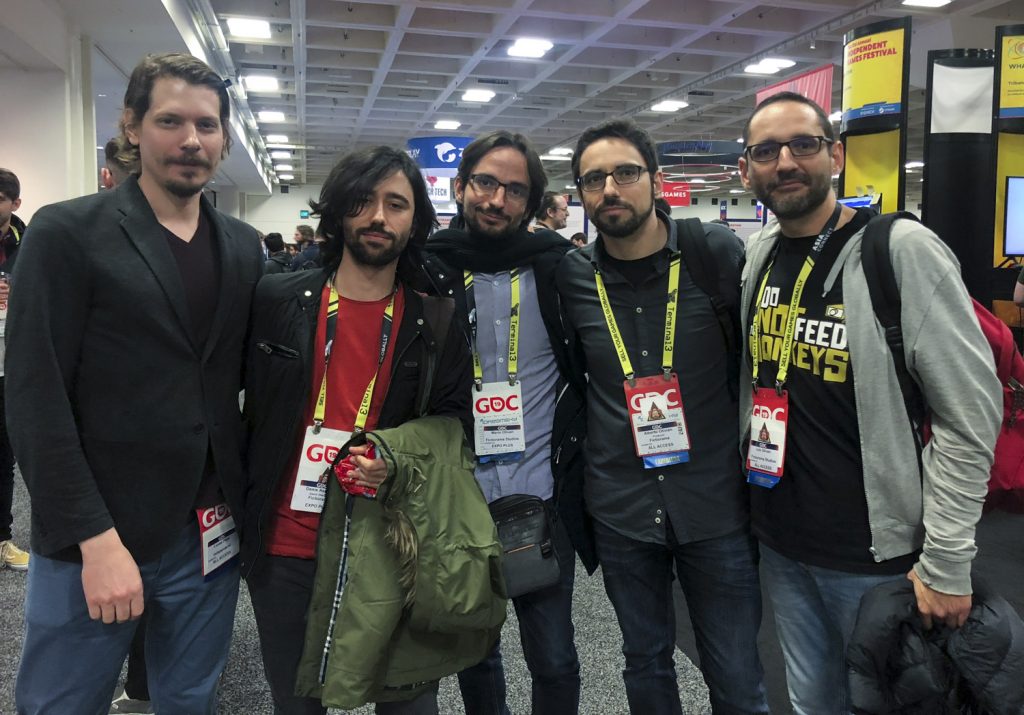 After a couple of days attending some great talks, personally meeting (finally!) the lovely crew of Alawar Premium, doing some sightseeing and enjoying cool parties like the one hosted by Humble… IGF eventually started! To our surprise, our booth was in the middle of the booths of two games made by developers we’ve been admiring for years: Lucas Pope, who was showcasing Return of the Obra Dinn (a finalist in almost every category) and Terry Cavanagh, who was exhibiting the fun, just released Dicey Dungeons. So… you know what? We had the chance to meet them both and they are the most charming, kind guys!

We also had the chance to meet Jay Tholen, developer of the crazy IGF finalist Hypnospace Outlaw and Daniel Benmergui (Storyteller); to meet again Dave and Jane Gilbert (Unavowed), Alistair Aitcheson (The Book Ritual)… and to talk with so many interesting fellows that we’d fill the post just mentioning them!

So on the evening of the 20th, the awesome narrative designer Meg Jayanth brilliantly hosted the IGF Awards Ceremony, which was an amazing show, as «clockwork-perfect» as everything in the GDC & IGF program. And, well, Do Not Feed the Monkeys didn’t get any award (congrats again to the awardees, specially to Lucas Pope, the absolute winner!)… but the Fictiorama crew enjoyed an unbelievable night, including an awesome after-party! If you want to watch the full ceremony, just click here.

And in case you want to read a more personal, detailed diary of our journey to San Francisco (and, well, as long as you speak Spanish), you can read this chronicle that Alberto, Game and Narrative Designer at Fictiorama, wrote for El País, the most important Spanish newspaper.

Thanks a lot to the jury that selected Do Not Feed the Monkeys as an IGF finalist in so many categories, it’s been an absolute honor! And greetings to all the lovely people we met in San Francisco!

By the way, the 2020 Independent Games Festival submissions are now open until September 30th, 2019. So in case you want to enter this wonderful festival, hurry up and click here!

A few weeks ago, we visited Barcelona to attend Gamelab, one of the most important video games events in Spain. Do Not Feed the Monkeys was a finalist for five Gamelab Awards, prizes that are supported by the the Spanish Academy of Interactive Arts and Sciences. We were really excited that our game was a finalist, specially since, a few years ago, Dead Synchronicity: Tomorrow Comes Today was also a finalist in the Best Visuals category.

The prizes themselves are usually known as «pulgas» (literally «fleas»), and they’re nicknamed this way after the main character of La pulga (also known as Bugaboo or Roland in the Caves), one of the earliest Spanish video games. In fact the trophies are shaped like… well, odd cartoony fleas! 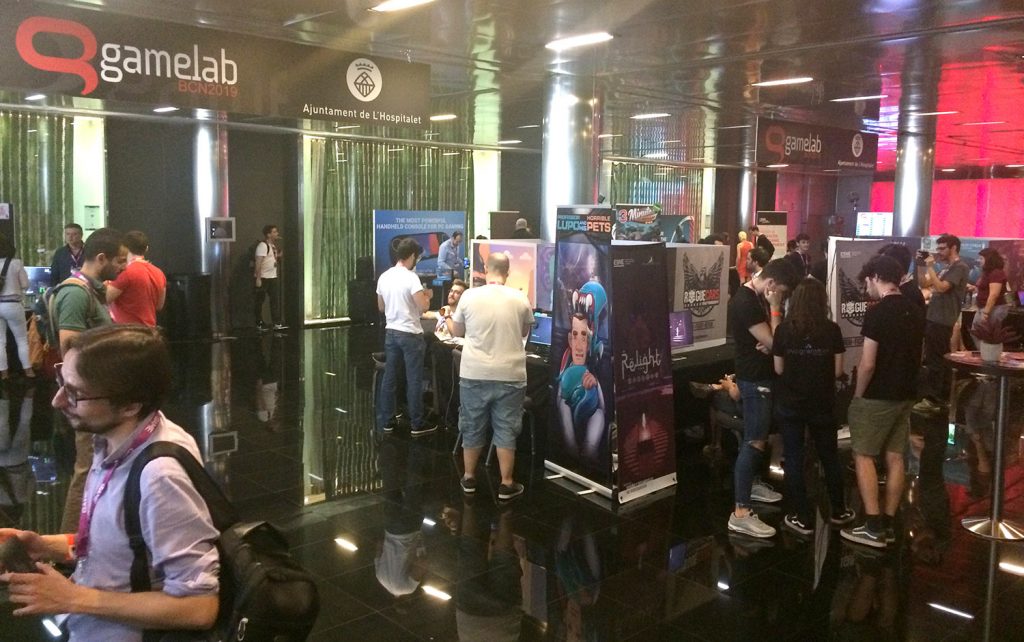 Although Gamelab took place from June 26th to 28th, we (again the Oliván brothers plus Denis Asensio) got there on the afternoon of the 27th, so we had a pretty tight schedule! In fact, since Fictiorama is a member of the board of DEV (the Spanish Game Developers Association), we tried every game in the showcase, in order to be part of the jury for the special prize that DEV awarded during the closing ceremony of Gamelab. Eventually, the crazy, fun Reventure by Pixelatto won the DEV award: congrats!

Also, Gamelab usually features some awesome key speakers every year, so we really had to struggle to be able to listen to some of the cool devs like Jordan Mechner, Katie Scott, Arvi “Hempuli” Teikari, Kate Edwards, Dino Patti, Raúl Rubio or Josef Fares, just to name a few.

The Awards Ceremony took place on the evening of the 27th… and Do Not Feed the Monkeys was awarded the Best Game Design and Best Original Idea Gamelab prizes!

Finalist and winners of the Gamelab awards plus Gamelab’s director Iván Fernández Lobo (photo courtesy of Gamelab). Only one woman, yikes! 🙁

Yes, we had a huge celebration with so many mates we usually see once a year in Barcelona. Thanks so much to the jury… and congrats to every finalist and awardee, specially to Nomada Studio, since the beautiful Gris took the awards by the storm!

Every year, just after Gamelab finishes, the crazy, frenzied Indie Developer Burger Awards ceremony takes place… and each year the event is bigger and better than the last. This year, the… three hundred attendees! could enjoy, as usual, a burger and some drinks in the cool Mediapro Theater, thanks to the generous sponsors. And, once again, thanks to the effort of David Jaumandreu (Undercoders) and the injured Juan Albero (We Use Power Ups), and their crew, everyone had a really great time! Thanks SO MUCH, mates!!! 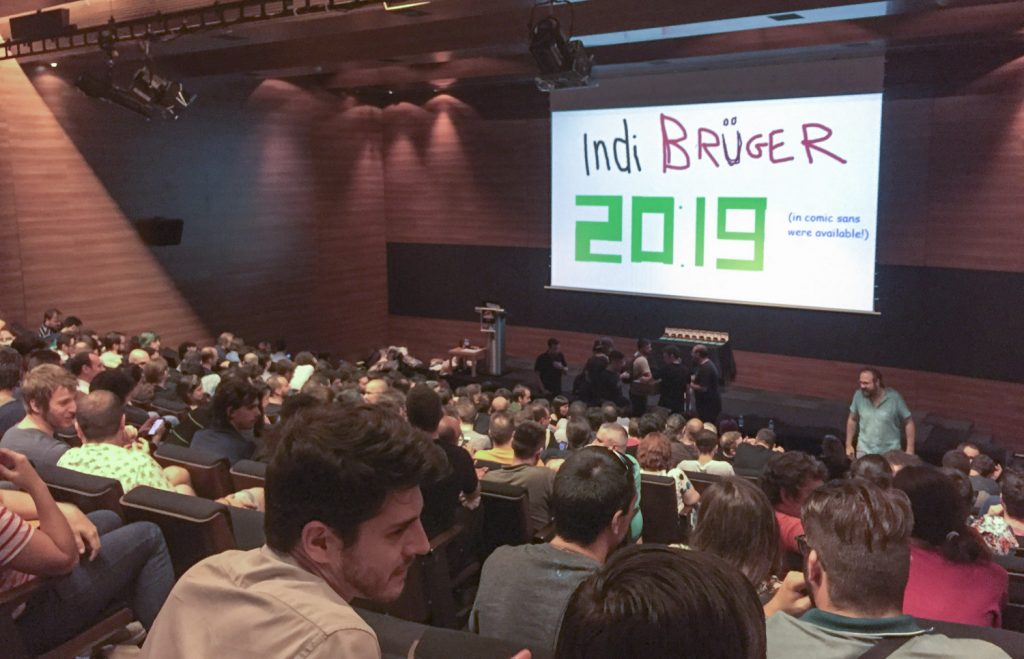 Yes, the typos are on purpose. Aren’t they?

The awards ceremony, hosted by the president of DEV, Valeria Castro (Platonic Games), and the famous streamer Pazos64, was truly fun. And, well, it happened that Do Not Feed the Monkeys was awarded the Most Addictive Game prize! Considering the jury of these awards are the developers that submitted a game themselves (although, of course, developers can not vote for their own game) we’re honored to know that so many Spanish dev-mates consider our game that enjoyable.

Congrats to the winners and finalists… and to everyone who had the chance to enjoy such a crazy evening!

This is what happens at the the @IndieBurgerDev Awards ceremony. Long live the Indie Spanish scene! pic.twitter.com/k2HsQMhqsH